Congratulations, March Baller of the Month 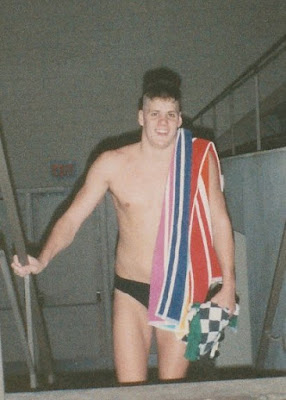 Did any of them play polo? Nope. Meredith swam in high school. We met at 15 years old as lifeguards of a local summer swim club, dated at age 16 and later got engaged on the sliding board of that pool.

Any other sports in your household? I don’t know if I failed or got lucky as my daughters never took to swimming. Instead they each spent many years at travel soccer before becoming top state competitors in lacrosse (Lauren) and cross country (Allyson).

Where do you live now? Jackson Township in the Canton area.

What is your occupation? Restaurant owner, Magazine Publisher

Years w/Cleveland State: 4 years in college and another 4-6 years with North Coast, which pre-dates CWPC 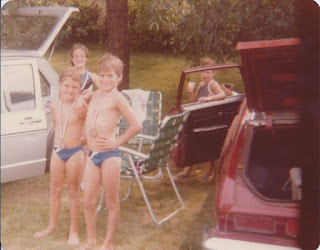 How many total estimated hours have you spent in the car with Bob driving to polo events? Wow! Bob and I get 2 hours and 20 mins of drive time each week. Double that when Tuesday’s are in full swing. But this is nothing new. Bob and I grew up just blocks from each other and we carpooled to our Canton YMCA Blue Streaks swim practices starting in 1977?

Favorite CWPC memory: Playing in the 2020 Ann Arbor tournament, getting my ass-handed to me by an all-female squad but still having a great dinner with the team at an Ann Arbor BBQ joint!

Favorite position to play? I always loved playing hole man. Especially when I was 6’2”, 180lbs and made perfect passes to a 140 lb lefty named Bob. We don’t connect as much now because one of us put on a little weight!

Favorite tournament so far? In my college days it was any tournament at Ohio State. We partied pretty hard back then. Two years in a row I slept overnight in the bushes in front of the aquatic center.

What Brian's teammates have to say about him ...

"I’ve known Brian since he was 8 years old.  We swam together at the Canton YMCA as age-groupers, then swan and played water polo together again at Cleveland State.  After college Brian and I worked together for years building my software business before he started his own restaurant empire.  Most of the fun and ALL of the trouble I have ever been in, has been with Brian.  Brian is always the center of the party and always goes out of his way to make sure everyone is having fun!  Congratulations Brian on baller of the month! " - Bob 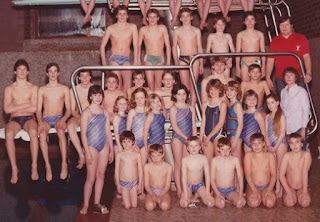 "Even on my worst days when I don't want to go to practice and I see Brian posting - you know he's excited and you know when you get there he is going to have a huge smile on his face. It just gives you that extra boost you need to make it a good practice. He's just great to have around!"

"His energy and enthusiasm is contagious and he doesn't know his own strength."

How many polo suits do you own? I have 4 in my bag. I wear two now because one just started transiting to a Steve Trow Tatter. I also have one that doesn’t fit and one long “jammer” suit that I just don’t wear anymore.

What is your favorite part about water polo in general? I love that it takes more than a good shot or a good pass to make a score happen. Many times the key to a great play is how someone clears a lane by pulling a defender out of position.

Fun fact about yourself: I can still solve a Rubik’s cube in under a minute.

How did you get involved with CWPC? Was playing for a bit with Akron University and wanted to get a little more competitive.

Why do you stick around? I will be here another 20 years because I want to see you guys struggle to play at age 50!

Favorite piece of water polo advice anyone has ever given you? Grant once told me “Don’t wear that jammer suit. You look like a goof.” 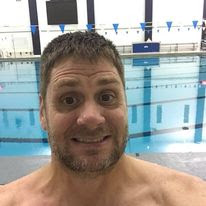 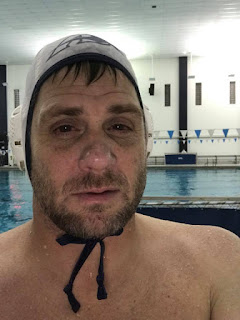 Casual before and after practice pics 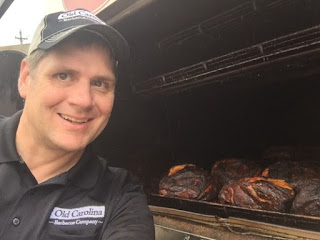 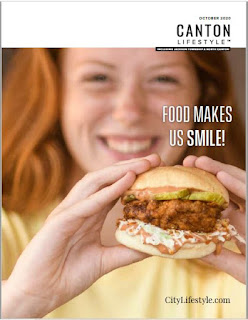 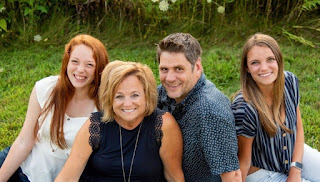 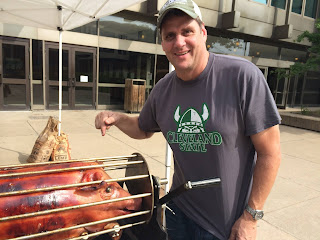 Thank you, Brian, for your enthusiasm, positivity and not being afraid to post up when we need you to. We love that you keep Bob and the rest of us motivated!
Posted by Trish Armstrong at 5:06 PM